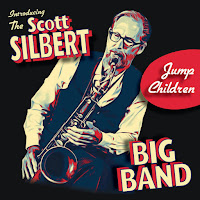 If I describe this as being one for nostalgia buffs it shouldn’t be taken in any way as a derogatory comment. Unless, your educator has indoctrinated you in to believing that jazz began with Miles and that his predecessors only played for money – like who didn’t? – this is as perfect an example of just why folks back then not only loved the music but danced to it too!
The big band era was when jazz or swing was at its peak. Ellington, Basie, Goodman, Dorsey et al brought the music into the ballrooms, the concert halls and, via radio, the living room.

Silbert, a former member of the United States Navy Band, has assembled a swinging crew that recreates those days at ballrooms such as the Savoy, Palomar, Roseland or maybe even a dancehall near you. The difference is that the musicians here have picked up from the past masters and brought it into the present without resorting to elements of fusion, hip-hop or whatever is being passed off as jazz these days.It swings, it has four beats to the bar and if you ain’t dancing around the room – Jack you’re dead!