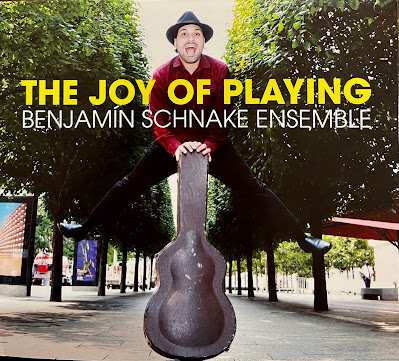 Musician, Multi-Instrumentalist, Composer and Arranger Benjamin Schnake is at the top of his musical game as proven by the wonderful music he has composed for his new CD,  “The Joy Of Playing”.  The album released in late October proves that he is 100% right about his title “The Joy Of Playing”.  Listening to his Ensemble and his compositions, one gets the feeling of musical joy.  Benjamin has a colorful and wide-ranging musical history.  Born in Santiago de Chile, he started classical and popular guitar lessons at the age of 10.  In 2017 Benjamin started his Masters in Music at Howard University in Washington, DC.  His next stop was at New York University in Manhattan, NY studying guitar and composition with some of the greatest musicians of the New York scene: John Scofield, Peter Bernstein, Adam Rogers, Alan Ferber Gil Goldstein and Alan Broadbent.
According to Schnake “My deepest musical background comes from Latin American music, particularly folk music form the Andes”.  He earned a Master of Music in Instrumental Performance with a focus on Jazz Studies in February 2019.  I have listed only a short list of his studies and experience in the music world.  He is no casual student of music.  His life is totally entwined with music and the music he creates proves he has learned his lessons well.  I particular like the way he creates his songs with heavy involvement with Jazz but never forgets the importance of strong melody.

I have attached two “YouTube”  videos for you to sample.  The first is an irresistible Latin rhythm tune entitled “Marisol” that takes only one hearing to love.  The arrangement is musically perfect and I fell in love with it before it even ended.  The second is a beautiful ballet entitled “She’s Gone”. Benjamin has always loved Jazz ballads and his composition is very emotionally moving.

Song of the Day:…