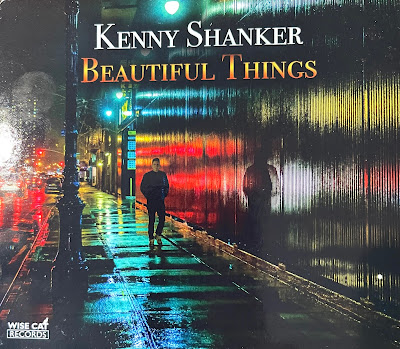 Kenny Shanker is one of the young alto saxophonists on today’s Jazz scene who loves to perform music from Bebop to traditional standards.   Shanker released his fourth CD in August of 2021 entitled “Beautiful Things” that contains original compositions and some Jazz standards out of the “Great American Songbook”.  The common element that brings all these diverse songs together is that they are all beautifully written songs.   Kenny Shanker is just not a great alto player, he is an award-winning composer, pianist and vocalist.  His compositions are melodic and accessible;  two important traits that I look for when enjoying Jazz.
Shanker lives in NYC and has played at almost all the Jazz venues in the city starting with Carnegie Hall, Birdland,  Dizzy’s Club, Smoke, Smalls, Fat Cat, and Jazz at Kitano just to name a few.

I  remember being fascinated with Cannonball Adderley in the 60’s.  He played a lot of Bebop but then Adderley released an album entitled, “Cannonball Adderley with Strings” that covered standards.  I remember how impressed I was with his ability to perform Bebop and still have an emotional feel for some great standards.  Shanker possesses the same skills;  he can do it all and makes his alto come to life on everything he plays.  His compositions are remarkably good, and will be heard for years to come.

Joining Shanker to create this CD is a talented group of musicians who have been performing with Shanker for a long-time.  Bill Mobley on Trumpet, Daisuke Abe on Guitar, Mike Eckroth on Piano, Yoshi Waki on Bass and  Brian Fishler on Drums.

3. It Never Entered My Mind

9. Softly As In A Morning Sunrise

Jackson Potter is reviewed by Amazon with 5/5 Stars