The acrobatic configurations and gliding sails piloted by Thomas Heflin with his trumpet bedazzle the mind.  His latest CD Morning Star from Blue Canoe Records sees him navigating his team of musicians through scores with a sense of expressive verbosity and seamless interaction.  From the samba vibes wafting through “Haiku” to the soul jazz grooves imbibing “Morning Star” and the soft bluesy quakes shimmying along “Evensong,” the recording is a vibrant tapestry of jazz, soul, and blues with a speckling of Latin-imbued components. 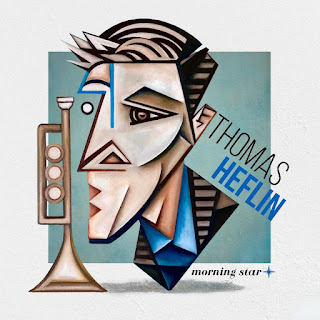 The lobbing knolls crafted by Heflin’s trumpet coast along “Evensong,” ebbing on occasion to make space for the warmly tempered solos of keyboardist Peter Stoltzman and saxophonist Gregory Tardy.  The arrangement is shellacked in the breezy riffs of guitarist Aaron Matson,  keeled by the gentle rocking of bassist Steve Haines and drummer Xavier Ware.  According to Helfin, “Evensong” is interpreted to be “a service for evening prayers,” which he evokes with the passages serene gusts.  Heflin, Stoltzman, Haines, and Ware approach “Interlude” in the same manner, evoking a picture of deep serenity in the music’s mood.

“The Moon Singer” continues the theme of projecting tranquil vibrations, adding the chanting vocals of Ariel Pocock into the score.  The moonlight glitter of Stoltzman’s keys sprinkle “Anna Breschine” with a dusting of heavenly repose, as Heflin’s trumpet arcs over the arrangement, giving it a voluminous shape and robust physique.  The only composition that is not an original on the recording is “Self-Esteem,” by James Williams, a synthesis of soul and jazz.  Heflin’s version has been rearranged to feature vocalist Mavis “Swan” Poole singing the uplifting lyrics by Pamela Baskin Watson.

Heflin’s recording fuses traditional jazz with soul and blues, some of which shows a hint of a Latin flare.  According to the press release, “the music was recorded at the beginning of the CoVid outbreak, and the ‘morning star,’ (which) is the last star seen at night before the new day arrives, serves as a musical symbol of hope and optimism through these dark times.”  Indeed, Thomas Heflin accomplishes his task to play music that spreads hope and optimism, and best of all, serenity.