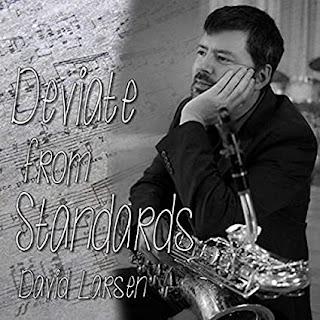 David Larsen: “Deviate From Standards” – As saxophonist and composer David Larsen mentions in the album’s liner notes, Deviate From Standards began as a way for him to continue making music even as the pandemic shut down concert venues. Clearly it also helped him remain upbeat during a difficult time, for this music swings and grooves, at times feeling like the soundtrack to a movie you want to escape to. Such is the case with its opening number, “A New Thing Comin’,” with David Larsen joined by Greg Yasinitsky on saxophone, the track creating a cool, positive atmosphere, taking us to a place where there is action and charm, where we know the angles, know just what moves to make. Then check out that work by Danny McCollim on keys on “Smoke Screen.” The album contains all original material, composed by David Larsen. Ken Peplowski provides some wonderful work on clarinet on “Augmented Reality,” and I love that conversation between the instruments toward the end. The music does enter a mellower, more reflective place with “Family.” I think most everyone came to place a greater emphasis on family during the pandemic, as people reevaluated their priorities. “See You At 8” imagines a time and place when folks are able to get together and enjoy themselves. We are now re-entering this place, but for a long time it felt like we’d never get there. “Into The Light” creates a cheerful place, a friendly place, a place we long to dwell. The music on this disc feels like it is welcoming us back to the world. It feels good to be back, doesn’t it? This album was released on October 1, 2021.

JAZZ2LOVE Album Review: What I…

Kari-On Productions was created by musicians for musicians to give an even footing in the ever-changing, ever-evolving music fabric. Music has expanded its ability and definition of "broadcasting," and so have we. In a 21st-century way of thinking, we don't look in the rear view mirror; we keep our eyes on the road ahead so we can watch the trends and keep you #trending.