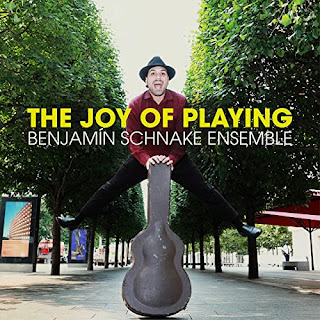 Benjamin Schnake Ensemble: “The Joy Of Playing” – Guitarist Benjamin Schnake presents mostly original compositions on his new album, and we can hear the joy in his playing from the disc’s opening moments. That first track, “Marisol,” named after a woman he was seeing, features not only some excellent work on guitar, but some bright work from the horn section, made up of Dave Pietro on alto saxophone, Tim Struven on tenor saxophone, John Blevins on trumpet, Eric Quinn on trombone, and Jennifer Wharton on bass trombone. I want the good cheer of this track to spread out into the crazy world. That’s followed by the title track, “The Joy Of Playing,” which has a kind of playful sense about it, contains some interesting changes, and features some nice work by Santiago Leibson on piano. Also, I really like that section that features Paul Shaw on drums. “Fragment” begins with some solo guitar work that might seem simple, but has its own beauty. Nearly a minute in, he is joined by the other musicians as that chord progression continues for a bit, before Santiago Leibsen takes a lead on piano. Then Benjamin Schnake delivers an excellent lead on guitar, while the music swells at times below. This track also features some nice work by Sunhyun Yoo on alto saxophone, with Paul Shaw’s drumming rolling and moving everything forward. “She’s Gone” is a gentle, loving piece, featuring some sweet work from the horn section. Benjamin Schnake plays mandolin on “Lakitas,” a completely enjoyable piece that also features Ammon Swinbank on flute. In addition to the original compositions, Benjamin Schnake Ensemble covers a Chilean piece titled “Aju” and Charles Mingus’ “Goodbye Pork Pie Hat.” This album was released on October 22, 2021.