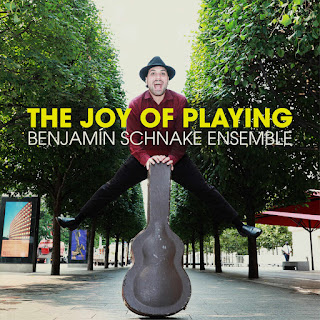 Chilean-born jazz guitarist Benjamin Schnake is preparing for the October release of his first album as an ensemble band leader. This new album is titled “The Joy Of Playing,” which is the perfect motto for Benjamin, who has been performing and writing music professionally for nearly two decades. Benjamin Schnake has performed all across Chile and worked on the soundtrack to the HBO show “Profugos,” while also writing music for the Benjamin Schnake Ensemble.The seven-song album begins with the energetic melody of “Marisol,” as Benjamin’s guitar work opens and closes the song with the exciting plucking of the strings. The title-track “The Joy Of Playing” dates back abut four years and was one of the first songs written for this ensemble. It carries a very classic jazz style appeal with the perfect balance of horns, as Benjamin lets his band lead the way on this musical number. He slows down the pace with the gentle ballad “She’s Gone,” before returning to his roots with the traditional Chilean piece “Aju,” which will put a swing in your step. The album finishes with the Benjamin Schnake ensemble rearranging the Charles Mingus original “Goodbye Pork Pie Hat,” adding their own special touch to melody, while also staying true to the original, along with “Lakitas,” which puts Benjamin’s guitar/mandolin skills on display once again. To find out more about “The Joy Of Playing,” the latest release from the Benjamin Schnake Ensemble, please visit benjaminschnake.com.

MAKING A SCENE by Jim…