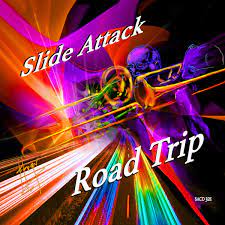 A formidable two trombone line is created by Howard Levy and Alan Goidel as they give brassy bravado bopping originals with a team of Hiroshi Yamazaki/p, Michael Goetz/b and Chuck Zeuren/dr.

What’s clever here is that most of the tunes are based on jazz standards, with a few tweaks. Thus, you get Zeuren’s brushes deftly sashaying under the horns on the Jobim-esque “Clauditti” and the valves relaxing on the Rogers and Hartish “A Walk in the Park”. The team grooves high on the Birdlike  “Owens” and spits out watermelon seeds for a boogalooing groove on “Struttin’”. As for the solos, these guys are polished like the front of a 49 Buick, with Levy plunging like Kim Kardashian’s neckline on the shuffling “Road Trip” and Goidel sliding like Ricky Henderson during “Bluedemic.” Bright and clear!